You may irritate while finding different psychologists detailing different emotional intelligence definitions. In fact psychologists have been trying to give a more comprehensive emotional intelligence definition by highlighting various aspects of Emotional Quotient (EQ). In other words none of the descriptions is wrong though they may vary in their content. However, we need to understand EQ since evolution of the IQ and then the development of concepts for the EQ. 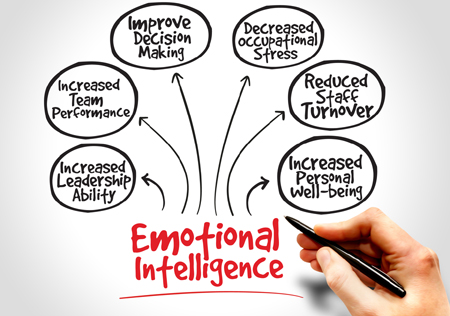 In the 1900s, intelligence emphasized mainly on cognitive aspects such as problem-solving and memory skills. After this, several psychologists and researchers recognized that the intelligence of a human being can go beyond the traditional form of intelligence (IQ). In the decade of 1920, E.L. Thorndike included social intelligence concept within emotional intelligence, which rendered the skill of understanding and managing other people as well.

At the basic level, emotional intelligence could be defined in these words

‘The ability to recognize and regulate feelings and emotions within ourselves as well as others ‘(Goleman, 2001)

“Emotional intelligence is a type of an ability which involves monitoring the feelings and emotions of our own selves and others, discriminating amongst them and making use of this information for guidance in actions and thoughts.’ (Salovey & Mayer, 1990)

“A person’s ability to perceive feelings and emotions, integrating these emotions for facilitating thoughts, understanding those emotions, and regulating them to promote personal growth.’ (Mayer and Salovey, 1997).

Alongside these researchers, another prominent psychologist who has made contributions in the field of emotional intelligence is Reuven Bar-On. This psychologist can be rendered as the originator as the term ‘emotional quotient.’ This aspect possesses a slightly different dimension and defines,

“Emotional intelligence involves being concerned with the understanding of the emotions of own self and others is also related to people along with adapting to and coping with immediate surroundings for being more successful in handling environmental demands.’ (Reuven Bar-On, 1997).

In the late 1900s, Howard Gardner, Harvard-educated developmental psychologist proposed a revised theory of multiple intelligence in the emotional intelligence definition which dictates that humans possess aptitudes in different aspects like verbal, spatial, mathematical, musical, environmental, movement-oriented, intrapersonal which involves the evaluation of one own feeling, as well as interpersonal which, refers to the ability to understand intentions, desires, and moods of other people (Myers, 1998).  Initially, these intelligence spheres were thought by Gardner to be an essential type of intelligence measurement (Gardner, 1983).